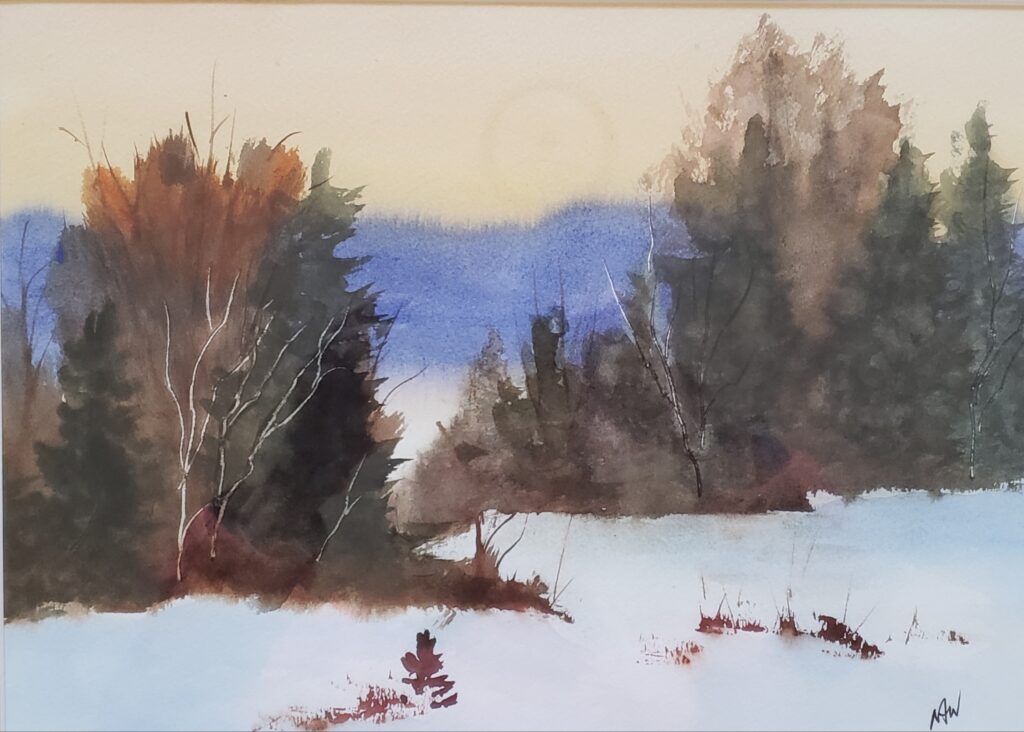 For Love of Nature is a story in pictures by five artists and friends of their intense love of nature. They capture on canvas and paper specific moments of nature in Central Pennsylvania’s diverse and unique beauty: flaming trees in the fall, the morning mist over a lake, a fish jumping in a stream, a tiny bog turtle, or a darling little wren. We are not isolated in Pennsylvania. The monarch butterfly migrates to Mexico and the hickory shad swims upriver from the Atlantic Ocean. With our artwork we try to show how every small part is connected to the whole.

Image Above: Artwork by Nancy Wentzler

Three billion birds have been lost. Monarch butterflies recently made the Endangered Species List. Black rhinoceroses are Critically Endangered. Blue monkshood are Threatened. Yellowfin tuna are Near Threatened. Polar Bears are Vulnerable. There are many status categories on the road to Extinction and many factors contributing to the decline of species, and the decline is accelerating. The sad, bad news for wildlife keeps coming. But there is hope, if only humanity takes action, even one little step at a time by each individual.

To that end, Barbara and Pat have created artwork of a handful of species in decline in Pennsylvania, and these are on view in the display cases. Though they concentrate on species close to home, there is cause to be concerned about what happens in the rest of the world, for Earth is a complex, finite system, and everything is interconnected. It is said that if a butterfly flaps its wings in the Amazonian rain forest, it can change the weather half a world away. Many of the bird species we enjoy in spring and summer spend the rest of the year in Central America or South America, or elsewhere. If the spots along migration routes where species have stopped for millennia to rest and replenish are degraded or their food source has vanished, birds cannot survive. If their habitat at the other end of their route has disappeared, they cannot survive.

On the Gallery walls, Gail, Sandy, and Nancy depict wild lands needed for flora and fauna to inhabit and flourish. Lands such as these are being degraded or fragmented and poisoned with herbicides, pesticides, and industrial or agricultural waste.

These five artists came to do art by different routes and they work in different mediums. What they have in common besides their love of nature is a deep concern for the losses being suffered by the planet. They hope this exhibit enlightens and prompts viewers to start a conversation, to take a small step toward helping stop climate change, to encourage elected officials to legislate for the planet.

The Public Library of Union County is located at 255 Reitz Blvd, Lewisburg, PA 17837 – the Gallery is open to the public during their normal hours.