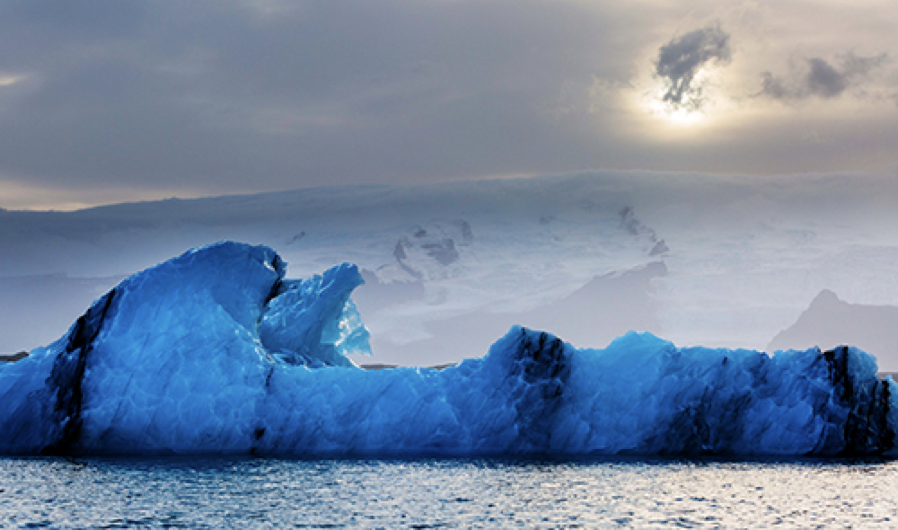 Feeling a bit cabin-bound now that winter is finally here?  Finding it hard to make travel plans?  If so, the Public Library of Union County (255 Reitz Boulevard, Lewisburg) suggests you take a trip to “Gallery 255” to view the work on display in the lobby through the end of January.  Entitled “Landscapes Worth Sharing,” the current display features photos taken on the globe-trotting travels of two local photographers, Owen Floody and Thom Travis.

One wall features 18 of Floody’s photos, taken on a September 2021 trip to southern Iceland.

Floody’s first six photographs capture the wild beauty along Iceland’s shores.  One photograph details a weathered glacier dotted with patches of turquoise-colored ice.  In another, a lighthouse’s tiny dot of brightness draws the eye in a moody shot of shore and sky.  In a third, a rugged iceberg dominates the scene (pictured above).

Although similar in size to Pennsylvania, Iceland offers geology and geography that is much more varied.  The island is a land of fire as well as ice:  Inland, volcanoes spew forth molten lava, which cools in lava fields. When glaciers move across the lava fields, they pulverize the black lava into sand, which then collects to form deserts.  Although Floody has visited Iceland several times before, this was his first time seeing black-sand deserts.  “They blew me away,” says Floody.   “While I might expect to see landscapes like these on some other planet, their presence in Iceland seems otherworldly, and wondrous.”  Along with black-sand deserts, Iceland’s interior also offers volcanic cones and craters, and crater lakes.  It is possible to see examples of these geologic marvels, depicted in photographs #7-12, in one day’s time.

The final six photos reveal more of Iceland’s sweeping vistas.  In addition to its black-sand beaches and black-sand deserts, Iceland is famous for its waterfalls.  Photograph #18 features a waterfall canyon whose location is kept secret by Floody’s tour leader.  Fortunately for us, Floody captured the beauty of this scene with his camera.

Waterfalls also feature prominently in the photographs taken by Thom Travis.  Travis has traveled to 110 countries around the world and enjoys recording his experiences in his photos. The caption for the photo from a trip to the Lauterbrunnen Valley in Switzerland proclaims this is “the most beautiful in Europe.”  This 2.5-mile valley, with its 70 waterfalls, can easily be walked in a few hours.  Another caption declares that “the most spectacular waterfalls in the world” are the Iguassu Falls, found in Argentina and Brazil.

Travis is an avid hiker and skier, and his travels have taken him to the most breath-taking places on Earth, including all of the major mountain ranges of the world.  Photos of the Matterhorn in Switzerland and the Mont Blanc range in Chamonix, France, portray hiking and ski trips in Europe.  Travis says that his “most magnificent” mountain experience was a 21-day trek to the Mount Everest base camp and Gokyo Lakes in Nepal.

Another journey represented in the exhibit is a cruise to Antarctica and South Georgia Island.  Along the Antarctic coast, the ship sailed past icebergs of various shapes, some of them with blue stripes, as depicted in one photo.  Isolated in the Atlantic Ocean, South Georgia Island contains spectacular mountains and glaciers, as well as millions of penguins shown in another picture in the exhibit.

To complement his photographs, Travis has filled the lobby cases with handcrafted items from more than 10 of the countries he has visited over the years. Several pieces in the display come from the Orient.  He describes how they were added to his collection:  “In Beijing in 1994 I had just finished touring the gorgeous Temple of Heaven.  I ventured into a side building on the site which had a crafts shop.  I was dazzled by the array of beautiful wall hangings, vases, cork carvings and other artifacts.  I bought the vase and cork carving there.”

No matter what exotic locale you’re longing to visit, whether it’s the sun-drenched dunes of the Sahara Desert, a snow-covered peak in the Swiss Alps, or an otherworldly Icelandic black sand desert, these talented men have a photograph to whisk you away … if only in your imagination.

Retired Bucknell professors, Floody and Travis enjoy sharing their experiences with others through their photographs.   Travel offers Floody opportunities to pursue interests in scenery and wildlife as well as photography.  Travis keeps active in his “older” years by hiking, skiing, swimming, reading, traveling, writing a book about his travels, photographing, and volunteering. Both are active members of the Lewisburg Arts Council’s Photography Club.